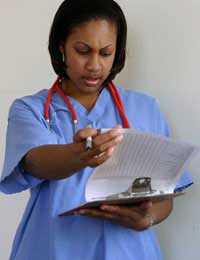 An ectopic pregnancy occurs as the fertilised egg implants elsewhere in the body, commonly in the fallopian tube instead of the uterus. It then grows in the tube causing the tube to swell with the contents. This can be very dangerous and life-threatening in some cases as the tube can rupture causing severe blood loss.

If an ectopic pregnancy is suffered, it must be treated medically as soon as possible. Symptoms include pain, bleeding and nausea. If you feel breathless and dizzy medical assistance is needed immediately.

What Causes an Ectopic Pregnancy?

The greatest cause for an ectopic pregnancy in modern society is due to pelvic infections. With the recent increases in sexually transmitted infections has also brought a rise in ectopic pregnancy incidence. During these infections, the fallopian tubes can become inflamed and scarred causing the egg or embryo to become stuck in the tube and unable to enter and embed in the wall of the uterus as in a normal pregnancy.

If a pregnancy has occurred whilst the woman has an intrauterine coil device in situ for contraceptive purposes, this can encourage any pregnancy to occur away from the lower half of the uterus, usually in the fallopian tube.Anyone who has had surgery to the lower pelvis is also at risk as scar tissues can encourage implantation to occur in the tube instead of in the womb.

There is evidence that some fertility treatments can also contribute to the incidence of ectopic pregnancy but this should be discussed with your fertility treatment provider.For many women there may be no known or obvious cause.

Can It Be Prevented?

For those who have unprotected sex, it is advised they are tested and treated for any infections before they consider starting a family in order to lower the chances of an ectopic. Make sure all medications are taken as advised and the whole course of antibiotics is taken.

If you want to start a family, stop using contraception and allow fertility to return to normal. For most sufferers there can be no way of preventing an ectopic as often they will be unaware that they are pregnant as the symptoms usually prevent in the very early weeks.

Treatment of an Ectopic Pregnancy

Following confirmation of the pregnancy using a regular test, an ectopic that hasn't ruptured the tube may be treated with a drug called methotrexate, but more commonly the doctor may wish to make an official diagnosis using a laparoscope that is a telescope inserted into the abdomen, usually at the naval to visualise the ectopic. They will normally discuss the option of treating the ectopic at the same time if one if diagnosed.

This treatment may involve the doctor opening the tube up, removing the contents of the tube and sewing it back together again, or might involve removing the section of tube that contains the ectopic.

If the tube has ruptured and there has been a lot of blood loss the surgeon may well perform an open procedure allowing him/her to directly visualise the site of the bleeding and control the blood loss.

It is very difficult to perform key-hole surgery if the abdomen is full of blood.Future pregnancies will have to be conceived using an egg from the other ovary if the tube has been removed, but if the tube has been salvaged, it may function as normal, but as there is now scar tissue around the tube, this might raise the incidence of another ectopic occurring.

Ectopics pregnancies occur in less than 2% of all pregnancies but this is set to increase as sexually transmitted infection continue.Due to advances in key-hole surgery, in many cases the tube can be saved allowing for more chance of a future pregnancy but in some cases this just isn't possible.