What is Exercise Induced Amenorrhea? 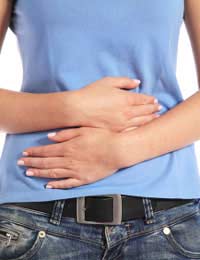 Although the term exercised induced amenorrhea sounds very complicated, it simply means that a woman who exercises very strenuously may find that her periods stop. Amenorrhea is the medical term that means an absence of menstruation. This condition can be quite common, particularly among young female athletes who train hard and also have low amounts of body fat. Heavy training and low body fat reduces the amount of oestrogen and other female hormones and this can interrupt the normal monthly menstrual cycle.

What are the Effects of Training?

In most women and girls, normal training routines and fitness/exercise schedules do not cause the periods to stop. If extra training is necessary for a special event, such as a sponsored run or a competition, building up the time spent exercising can avoid an adverse impact on periods. This is important because when the periods stop, this is a sign that the body may be affected in other ways that could have long-term implications for health.

Excessive exercise can also cause premature osteoporosis – causing the bones to age much more rapidly and be more prone to stress fractures and fractures that could be sustained during a fall. Irregular periods can also lead to infertility, which is made more likely as strenuous exercise also prevents normal developing of the lining of the womb. If fewer eggs are produced by ovulation, even the ones that make it through may not implant once fertilised. Of course, women doing such serious physical training may not be trying to get pregnant, and may be actively avoiding it, but the impact of exercise in the long term may affect a woman’s chances of getting pregnant in later life, causing the distress of infertility.

How Much Exercise is Too Much?

Although periods might not stop altogether, training can disturb the menstrual cycle in subtle ways. Teenage girls who try to start running 30 miles in a week using only a couple of months training to build up to that level could easily see their periods become very erratic. Studies have also shown that relatively gentle exercise such as jogging can cause fewer egg follicles in the ovaries to develop, even if a runner only covers about 15 miles in a week. Any long distance runner is at risk – this group of women is second only to ballet dancers for being at risk of exercise induced amenorrhea.

Risk of Amenorrhea in Ballet Dancers

Girls and young women who take ballet to a competitive or professional level are particularly at risk because they not only exercise for many hours a day; they also tend to eat very little and are very thin, with low amounts of body fat. Eating disorders are common, and either anorexia or bulimia can also cause erratic periods and a hormonal imbalance.

Poor diet in the late teens and early twenties can mean that women never manage to build their bones to the correct level. Bone density in women is at its greatest at the age of 35, after which it declines steadily until the menopause. After that, bone is lost much more quickly and women who have been athletes run the risk of fractures in late middle age.

Ironically, sensible exercise can help to build bone density – but it must be done in combination with eating sensibly and taking calcium and vitamin D supplements as necessary. In very severe cases, when periods are absent for a long time during competitive training in gymnastics, for example, hormone replacement therapy might be necessary, just to keep the bones at a healthy density until the training schedule becomes less intense

Why Sanitary Protection is Becoming an Environmental Issue