Home > Breasts > Lymphedema: What Causes It?

Lymphedema: What Causes It? 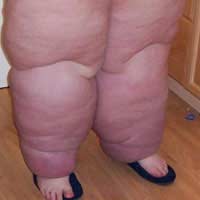 Lymphodema has a strict medical definition; it is the excess of lymph fluid that can accumulate in the tissues, usually the arms and legs. It can occur as primary lymphodema, caused by an abnormality of the lymphatic vessels that is present from birth, or it can develop as secondary lymphodema, as a side effect of treatment for cancer, or as a result of an infection.

For example, the disease elephantiasis is caused by a lymph vessel blockage as a result of a tropical parasitic infection. The lymph vessels in the legs become blocked and the legs swell so badly that they lower leg and foot resembles that of an elephant.

Lymphodema in the west is more commonly associated with cancer treatment, particularly with surgery to treat breast cancer. It can arise as a side effect of a mastectomy, in which the whole breast is removed in association with the lymph nodes beneath the armpits. It can also occur after a lumpectomy, a much less extensive operation that just removes the tumour and a healthy margin of tissue around it. A radical bilateral mastectomy can result in particular serious lymphodema, which can affect both arms. Radiotherapy to an area of the body that is rich in lymph nodes, such as the groin area or armpit, can also cause lymphodema.

Lymphodema is particularly common after surgical treatment for breast cancer. This usually involves a lumpectomy as a breast conserving surgery but lymph nodes under the arm are often removed for staging the tumour, and to check that it has not begun to spread to other parts of the body. Once the lymph nodes are removed, lymphodema is a significant risk, although it is not inevitable and does not happen in all women.

How do you Know you have Lymphodema?

The main effects of lymphodema involve swelling of the tissue, usually in the arm, hands and fingers on the affected side of the body, but it can also arise in the shoulder, in the chest or in the legs. The arm, hands and fingers of a woman who has had a lumpectomy, mastectomy or lymph node removal at first just feels very heavy and tired, a sort of ‘full’ feeling in the limb.

The skin can feel very tight, as if it is being stretched, and hot, as if the arm and hand have swollen as they do in very hot weather. An early sign may be that you cannot wear a bracelet, bangle or rings that fitted only a few weeks ago, but now are too small. As the lymphodema worsens, it can be difficult to fit clothes on as the sleeves are too tight, and then the swelling in the arm becomes significant and very obvious, sometimes balloon like.

Why Does Lymphodema Happen?

During breast surgery, if the lymph nodes under the arm are removed, there is a change in the normal physiology and anatomy of the arm. Some of the lymph nodes are gone and the lymph vessels that used to drain through them are often damaged. Repairing lymph nodes surgically is very difficult and they do not regenerate very quickly.

As the fluid builds up, the arm becomes swollen, red and very uncomfortable. Lymphodema is not an inevitable side effect of breast cancer treatment, but when it does occur it needs to be treated promptly to avoid long-term discomfort and tissue damage.

As well as getting treatment to limit the impact of lymphodema, it is also important to bear this condition in mind when doing things in daily life. Avoiding infection by taking care of any cuts or grazes is particularly important if one or your arms has developed even mild lymphodema, as the immune mechanisms in that limb are not as good as they should be and infection can take hold very quickly. The other major danger is going on holiday when a plane flight is involved. Lymphodema can develop on a long haul flight and compression garments for arms and legs may be a sensible option. If flying when you have been diagnosed with lymphodema, it is vital to see your doctor first and get advice on how best to cope and to avoid making the problem worse.