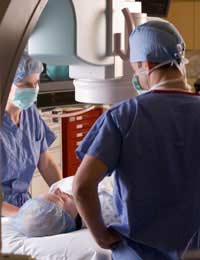 The neck of the womb known as the cervix is an important organ in reproductive health. Its function is to keep infections out of the uterus and to provide safe passage for the delivery of a baby. The normal cervix is quite tightly shut allowing only sperm to enter and menstrual flow to exit the body.

The cervix is made up of an external layer of cells known as the ectocervix and the inner structure is mostly muscular tissue with a layer of glands on the inside. These glands in the endocervix produce the mucus.

Cancer of The Cervix

Unfortunately the cervix is an organ that can easily develop cancerIf the ectocervical cells become cancerous a condition called squamous cell cancer can develop. Cancer of the glandular cells is called adenocarcinoma of the cervix.

The area around the opening of the cervix leading into the cervical canal is commonly known as the transformation zone. It is this area that most cervical cancers are first noticed which is why it is the most important area that is examined during cervical screening.

Screening For Cancer Of The Cervix

Unless you have had your cervix removed through a hysterectomy, it is important that it is regularly checked for the presence of potential cancer cells.Those aged between 25 and 60 years are the most prone to developing cancer of cervix so they are requested to attend appointments at least every five years to determine whether they are at risk or have already developed cancer of the cervix. The test performed is the cervical smear which requires a sample of the cervical cells to be taken and sent to the laboratory for analysis.

Treating Cancer Of The Cervix

The screening process can detect not only cancerous cells but pre-cancerous one as well, which are the cells that have the potential to become cancerous.These abnormal cells can be treated in an attempt to prevent the cancer from developing.

If these cells have been found your doctor may refer you to undergo a colposcopy in which an instrument is inserted into the vagina and allows for closer examination of the cervix. During this procedure the doctor will probably take a further sample of the tissue to be sent for examination.

The further treatments for this condition will depend on the extent of the abnormality and also the services provided in your area. These treatments are described more fully in another section of this website.If cancer has been found in your cervix, treatments can include radiotherapy, chemotherapy and surgery.

Radiotherapy may be indicated if the cancer is in its early stages and will involve the patient attending appointments in which the radiotherapy can be administered either externally using a typical x-ray machine or a probe may be placed into the vagina and applied that way. The cervix and the surrounding organs and tissues will all be treated.Each treatment will depend on the individual needs of the patient and may include a combination of treatments.

Surgical options for treating cancer of the cervix depend greatly on the extent of the cancerous cells. It may be that just part of the cervix is removed leaving behind the inner aspect at the entrance to the uterus, but often the entire organ will be removed along with the uterus in order to ensure that all the cancer cells are removed form the body.

In some cases when it is thought the cancer may have invaded the lymphatic system around the reproductive organs, some lymph nodes may be taken and sent for analysis.Advanced caner may mean that more tissue and organs are removed from the pelvis as well.

Chemotherapy is most often used in conjunction with radiotherapy and means the patient must attend appointments during which very powerful drugs are administered through a cannula in the vein. This does not have to take place every day but will require commitment from the patient in order to achieve the best results.

Chemotherapy can be very exhausting and distressing for the patient and a lot of support and encouragement from others helps to maintain the commitment needed.

Cancer of the cervix can be a life-threatening condition and each treatment option will depend on the person’s needs. The subject is vast and this article aims to provide a very basic insight into the types of treatments that might be offered.