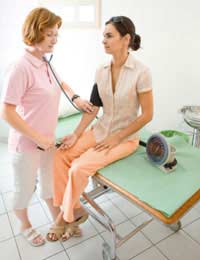 Many women are unaware that a patch has been developed offering contraceptive protection.Similar to a plaster, the patch is adhered to the skin and is most commonly sited on the upper arms, thighs or buttocks, though it can be applied anywhere except the breasts or any areas of damaged or sore skin.They are square shaped and approximately five squared centimetres in size.

How Does The Patch Work?

The patch contains two hormones, oestrogen and progesterone (like the combined contraceptive pill) which are slowly released and absorbed by the tissues.Once they have entered the blood stream they work on the ovaries, preventing ovulation and also the thicken the mucus around the cervix. In doing this, sperm are less like to get through the cervix, and in the event of one being able to reach the uterus, there would be no egg there to fertilise.

The patch should be used from the first day of the period and worn continuously for eight days when it will need replacing. The patches should be replaced every week for three weeks when a patch-free week enables the body to bleed as normal. The cycle of three weeks on one week off can then continue.Providing the patch is sited on the first day of the period, contraceptive cover is effective almost immediately.

Benefits of Using The Patch

Using the patch eliminates the need for taking a tablet everyday, having injections or implants routinely and can be applied and removed by the user.The patches are very discreet and are the same colour as skin tone and can be worn almost anywhere on the body.

They are very effective (up to 99%) if used properly and fertility returns to normal very soon after they are ceased.As the patch requires the user to have one patch free week out of our, bleeding becomes more regular and often lighter too after it has been used for a few months. In the first few months some spotting or break-through bleeding may occur.

Disadvantages of Using The Patch

The patch is not suitable for use by every woman and a thorough medical history and assessment must be taken before the patch is prescribed.Recent research has shown it may be less effective in over-weight women, especially those over 14 stones.

Occasionally the patch may become loose and fall off without the person being aware. The site of application should be checked every day to ensure it works to maximum effect.Breast-feeding mothers are advised to use an alternative form of contraception until breast feeding is stopped or for the first six months as the hormones released are thought to reduce the flow of milk.

Side-effects can include headaches and nausea though these usually subside a shortly after their initial use and in very few cases, the adherent substance may cause some minor skin irritation. If this does occur, change the site when changing the patch and monitor the new site. Prolonged irritation should be mentioned to your healthcare provider who may suggest an alternative form of contraception.

The patch does not provide any protection against sexually transmitted infections and becomes less effective when certain medications are taken.Always ask the doctor or pharmacist for potential drug interactions and diminished effectiveness if taking other medications.

A fairly new development, the contraceptive patch is very easy to use, very effective if used correctly and eliminates the needs for injections or remembering to take the pill every day.They can be used by most women, but a thorough medical history must be taken first as it cannot be used in some circumstances.