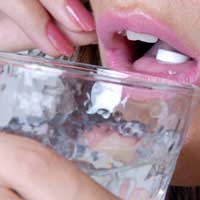 The emergency pill, also known as the morning after pill or the post-coital pill is available as a form of post-intercourse contraception used if the employed selection of contraception has failed to work properly or was not used in the first instance.

How Does The Emergency Pill Work?

The morning after pill contains a synthetic hormone called Levonorgestrel, which is similar to the naturally occurring progesterone. It is also contained is some of the regular oral contraceptive pills.

It works by preventing the release of an egg from the ovary or if one has been released and was fertilised, prevents it from implanting itself into the wall of the uterus and developing further.

Traditionally two pills had to be taken twelve hours apart but modern versions allow a single dose that should be taken as soon as possible after ejaculation but no longer than 72 hours after which you can see a doctor who may want to prescribe a higher dose of hormone.

It is a safe drug and unlike many myths surrounding this pill, doesn’t force an abortion as it will not be able to carry out its intended function if a pregnancy already exists.Although it is not 100% reliable and effective it is in most cases, up to 90% so is definitely worth trying if you are sure you do not want to conceive.

The modern version of the emergency pill causes very few side effects such as a small degree of nausea.It is not to be considered a regular form of contraception as the dose is higher than a regular contraceptive pill and it isn’t as reliable. If you find your condoms are breaking easily on more than one occasion check the expiry date, check the contents of any spermicidals used and maybe change the size.

Taking the emergency pill may alter the pattern of your regular cycle and your period may start earlier of be later and heavier than normal. If it is more than a week late, consult your doctor who may advise a pregnancy test.

Using this pill will not provide contraceptive cover for the remainder of that months cycle and a usual contraceptive will be needed.

Can Anyone Use It?

Providing there is no history of liver disease it is possible for anyone to gain access to the morning after pill and is commonly used by those who have suffered a rape or a broken condom.

There has been much controversy about the use of the emergency pill as it can now be purchased as an over the counter preparation as well as with a prescription. This has enraged mothers of young girls who feel their daughters may use this method without their knowledge, but doctors have decided that it is rationalised against the pressures of dealing with an unwanted pregnancy.

The emergency contraceptive pill should be used for emergency purposes only and not as a form of regular contraception; other forms are far more reliable.It must be taken as directed for maximum effectiveness and if your period is late, it may be worthwhile taking a pregnancy test in case of failure.

The emergency pill does not protect against sexually transmitted infections so if you have been raped or have discovered the condom broken, it is advised that you are tested for any possible infections.