Home > Contraception > All About the Coil 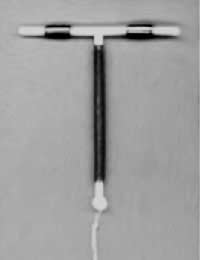 The Intrauterine Contraceptive Coil, (IUCD) more commonly known as the coil, is a form of contraception which involves inserting a device into the entrance of the womb via the cervix.

Modern versions of the coil are comprised of a T-shaped structure that are made of plastic and often a copper coil, with the T arms being inserted into the uterus. From the bottom of the coil into the vagina are two very fine threads that allow for ease of removal.Please note that the T arms are flexible and will fold down while being inserted.

The coil works by preventing the sperm from being able to enter the uterus, and in the event that one does, makes the inside of the womb inhospitable thus preventing a fertilised egg from being able to implant and develop.The coil can also change the amount of secretions from the cervix which can act as a further barrier to the sperm.

Contraceptive cover is provided immediately after insertion.One type of coil called the Mirena has the added benefit of containing hormones that can be absorbed into the bloodstream. This benefit can help to lighten periods and menstrual cramps and can also prevent ovulation.

If the coil is inserted by a fully trained professional then they are safe to use. There is a small chance that a hole could be put inside the womb, known as a perforation but this risk is small. If the person had an underlying infection, using the coil may cause this infection to inflame which is why some clinics now recommend screening for any sexually transmitted infections (STIs) before insertion. Some of the more common STIs can lay dormant with no symptoms for a long while.

Many doctors have found that it is easier to insert the coil in a patient who has had a baby in the past as the cervix is not as tightly shut.

The Benefits of Using the Coil

Using the coil removes the need for taking a pill everyday and is suitable for those who want longer term contraception.Modern coils are designed to have a life span of a maximum of eight years, though it is common to have them changed every five years.If a woman decides to start a family sooner than this, it can be removed and normal fertility will resume almost immediately.The coil has been shown to be at least 98% effective.

Disadvantages of Using the Coil

Occasionally the coil can cause periods to become heavier and last for longer so may be unsuitable for women with a history of anaemia or who is already bothered by having prolonged painful periods. However, the advent of the Mirena coil can help to solve these problems.

Some patients have said that they have experienced lower abdominal pain following insertion but this can be overcome by rest, hot water bottles and some paracetamol.Some women have also said that their sexual partner has been able to feel the threads in the vagina but this is not common.

The coil is an effective form of contraception that has been around for many years. Fortunately, modern versions are a lot safer and have a better design and insertion method than previous models. Check out other forms of contraception, in this section.