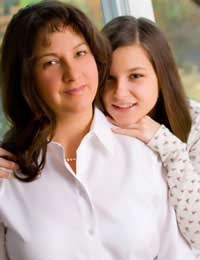 Often the most difficult part of teenage and young adult life is the period known as puberty. Puberty is the process of changes that we all experience as our bodies change from a child's to being an adult's.

What Happens During Puberty?

Signals that are initiated primarily in the pituitary gland found in the brain are sent to the reproductive organs triggering the release of hormones. These hormones result in the organs maturing and becoming ready to parent a child. These physical changes can take place over a year or so, or may take a lot longer in some people.

It can be a highly emotional and confusing experience as the body makes the progression from child to adult; some people find it an extraordinarily important event, whilst others embrace it and quickly become adjusted to the changes.

There are many physical changes that take place, not solely surrounding the reproductive organs, but with other physical characteristics as well. The body becomes larger and the frame more sturdy, internal organs grow larger, the shape of the body changes and muscles become stronger and more defined.

The chemical changes that initiate puberty begin with the release of gonadotrophin which is released from the hypothalamus in the brain. This hormone is sent to the pituitary glands that then releases follicle stimulating hormone and luteinising hormone which are sent to the ovaries.

When they reach the ovaries they cause oestrogen and progesterone to be released. These are the hormones responsible for allowing the female body to conceive a child.At the same time, the menstrual cycle is begun. The first day of the menstrual cycle is counted as the first day of bleeding. This bleeding is the lining of womb being shed. After the bleeding period of around 5 - 7 days usually the lining begins to thicken up again in case of a pregnancy.

When the lining is almost at its thickest, the ovary releases an egg that is sent down the fallopian tube. If it is not fertilised, the egg and the uterine lining is shed again during the next period.

Other physical changes include the growing of breast tissue. The nipple and developing breast start by becoming more pronounced; this is followed by the area around the nipple known as the Areola becoming darker.

Inside the breast the milk ducts start developing and fatty tissue is deposited. As this process is happening pubic hair begins to grow, initially around the groin area and then under the arms.

The sweat glands under the arms, in the groin, around the ears and around the navel start producing thicker sweat that is broken down quickly. When it is released and not washed away, it can gather and start to smell. The presence of pubic hair provides the sweat with a larger area which can make it collect and smell more.

Much in the same way as a girl, the brain produces gonadotrophin hormone that triggers the release of follicle stimulating hormone and luteinising hormone only when they reach the testes, instead of producing oestrogen and progesterone, testosterone is created and released.

As these chemicals are released, the testes become larger and the penis grows in length and width. In almost every male, the release of testosterone initiates the presence of erections which occur as the penis fills with blood allowing it to become hard, ready for sexual intercourse.

Pubic hair begins to grow and the facial features change; the jaw, nose and cheeks become much more pronounced and define and facial hair growth begins.The release of testosterone also causes the cartilage that supports the voice box to grow in response to the lengthening of the vocal chords. This cartilage growth causes the voice to 'break', meaning it becomes deeper and coarser.

Like females, the underarm sweat glands begin to produce a lot more sweat which is thicker and more stagnant as it clings onto the hair growth.

These physical changes can be very demanding both physically and emotionally on the changing teenager so a lot of support, understanding and often patience is needed for ease of passage through this difficult time.

By educating both the adolescent and the parent or carer, the transitional period will not be such a frightening and sometimes hostile time of life.