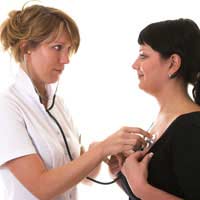 Heart disease has a very high prevalence in the UK for many reasons, and it is often associated with male health problems but in fact there are as many women affected as men and experts believe the disease is under diagnosed in women.

Why Are Women At Risk?

Women are equally at risk of heart disease because of lifestyle choices and smoking, diet and exercise are as a great a problem in women as they are in men.Stress is also now being considered as having a role to play in the development of heart disease and women are now more than ever before, suffering from stress because of their hectic lives. Organising the home, work, childcare and financial pressures, all add to the amount of stress that a woman experiences. Some people manage this stress well whilst others may not cope as well as suffer from ill-health as an effect.

Smoking tobacco permits dangerous chemicals and substances into the blood stream which can lead to blocked arteries and heart disease.Although great efforts have been made nationwide to stop smoking and raise awareness of the effects, more women than men continue to smoke and endanger their lives and those around them.

It is also true that obesity is becoming as serious problem in the UK and the younger generations particularly are at great risk of developing heart disease in the future as a result.Studies have suggested that women have a higher level of cholesterol in their blood than men, if they are over the age of 55 which puts them at a greater risk of heart problems.

Exercise is a key issues surrounding exercise and many women will admit that they do not take part in any physical activity. In the past the chores around the house traditionally carried out by women were a lot more physically demanding than they are in modern society, and no compensatory exercise is being performed in its place.

Women who smoke and take the contraceptive pill are much more likely to suffer from heart disease, this is increased further if the person is also over weight or obese.

It has been found that women who present with some of the symptoms of heart disease are being screened as thoroughly as men as the healthcare services recognise that it is usually associated with male. Fortunately these practices are being changed as evidence shows statistics that women are as at risk as men.

If you feel you have any of the symptoms relating to possible heart disease, please speak to your GP who can arrange some tests to be carried out that will detect and problems.

Why Is It Not Diagnosed Early?

There are several reasons why heart disease may not be diagnosed as early in women and experts have suggested that the symptoms are not as obvious in women as they are in men, that they do not seek help until; the disease has progressed and that most women are more worried about the well known female diseases and do not find themselves worrying about other conditions and are not as aware of them.

Heart disease is a great a risk to women as men which fortunately is now being recognised by healthcare professionals. As with most illnesses it can be prevented and women must become more aware of how their choices in life affect their general health and understand what diseases they are putting themselves at risk of developing.