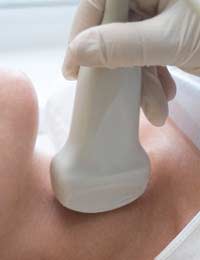 Illness due to dysfunction of the thyroid gland can occur in both sexes but many more women than men are likely to develop thyroid problems at some time in their lives. Risk increases with age and thyroid problems are most common in middle aged women.

The thyroid gland is a small butterfly shaped gland found in the neck. It produces two key hormones – thyroxine and triiodothyronine - which control all aspects of the body’s metabolism. Together, they regulate how the energy from our food is used to power growth, repair of tissues and our daily activities.

Hypothyroidism causes the metabolism of the body to become much slower than normal, leading to the symptoms of excessive tiredness, weight gain, joint aches, constipation, dry skin, depression and feeling cold most of the time. The brain is affected and thought processes seem to slow down, causing a feeling of general confusion and fuzziness. These signs can develop gradually and get worse quite slowly. Because they are fairly general symptoms, each of which can be explained by more common illnesses, hypothyroidism tends to be difficult to diagnose.

Hypothyroidism is twice as common in women than men and there are probably many women in the UK who have mild undiagnosed hypothyroidism.

Women who have untreated hypothyroidism may experience fertility problems and have difficulties conceiving because the condition tends to lead to infrequent ovulation. If a woman with hypothyroidism does become pregnant and diagnosis is still not made (this is common since many of the symptoms of early pregnancy are the same as those of hypothyroidism), this can prove dangerous. There is a much higher chance that the baby will be stillborn or will not grow normally. Other complications of pregnancy such as anaemia, pre-eclampsia and problems with the placenta also occur more often in pregnant women with untreated hypothyroidism.

Women who are known to have hypothyroidism before they become pregnant also need special care during their pregnancy as their need for the thyroid hormone replacement therapy that is used to treat the condition can increased by 25 to 50 per cent. The dose of treatment should be reviewed regularly to make sure that the thyroid hormone is at the correct level throughout the pregnancy.

Hyperthyroidism is the opposite of hypothyroidism and occurs when the thyroid gland is overactive and produces much higher levels of thyroxine than usual. This causes the body’s metabolism to speed up causing symptoms such as restlessness, shaking of the hands, palpitations, sweating and always being hot, losing weight even though eating more than before and having an over-active bowel. Someone with an overactive thyroid is constantly up and doing things, unable to sit still and in a constant state of agitation. In some cases, the eyes protrude, giving the person a worried, surprised look all the time.

As with hypothyroidism, an overactive thyroid is quite difficult to diagnose because these symptoms again occur with many other ailments and illnesses. Women are particularly at risk as hyperthyroidism is ten times more common in females than in males. Women who have untreated hyperthyroidism have a greatly increased risk of developing osteoporosis (brittle bones). Hyperthyroidism can also cause serious complications in pregnancy, including an increased risk of miscarriage, stillbirth, a low birth weight baby, abnormalities, early birth and pre-eclampsia.

As many as 10 per cent of women who have recently given birth suffer from postpartum thyroid disease. Women who are diabetic (with Type 1 diabetes) have a much higher risk of developing thyroid problems after birth. Problems start about 3 to 6 months after birth and can also follow a natural miscarriage. Unusually, the condition is temporary. It begins with the symptoms of hyperthyroidism but then converts to hypothyroidism. This up-and-down effect resolves itself and thyroid function returns to normal.

Treatment is not usually required but it is important that the condition is diagnosed as the symptoms can be wrongly attributed to post-natal depression that is then treated unnecessarily.

It is important that women who have had postpartum thyroid disease after one pregnancy are monitored carefully after subsequent pregnancies as the condition often recurs. Sometimes the thyroid is damaged by the imbalances and permanent thyroid problems can develop. In some women, the thyroid function returns to normal but, years later, then may developed thyroid disease as the tissues of the thyroid gland are more likely to be attacked by the body’s own immune system.

What is Multiple Sclerosis?
Share Your Story, Join the Discussion or Seek Advice..
[Add a Comment]
I meant my thyroid stopped growing when i was five years old. Does this have more serious implications to conceive than the thyroid just not producing the thyroxine? Or could it be another reason entirely?
Sammy Jo - 10-Jul-12 @ 4:33 PM
I have had hypthyroidism since i was six years old. My auntie had it and my thryoid stopped growning when i was 5. In past years i tried to conceive many times and never did. At the moment i am not in a relationship but in the future if i tried to conceive, would the problem to conceive be due to this reason (being that i am in regular ovulation) or another? Sammy Jo
Sammy Jo - 10-Jul-12 @ 4:31 PM
i have been suffering with this condition for 15 years i had radio iddine treatment and now take 125mg of thyroxin my condition never seems to be under control and i dont know why that is. it causes me allsorts of problems and makes me feel very unwell in myself.
paddy - 5-Dec-11 @ 3:50 PM
I found the thyroid problem interesting and I wanted to say I have thryroid problem in the neck and what can I do to treat it can you give me some ansers pleases thank you
sukhie - 9-Apr-11 @ 4:34 PM
Title:
(never shown)
Firstname:
(never shown)
Surname:
(never shown)
Email:
(never shown)
Nickname:
(shown)
Comment:
Validate: